Scott’s Thoughts: In many ways, Hadlock Field feels like an overgrown Little League park. The external facade is rather understated. The seating is only single-level, not two decked (with the exception of the press boxes behind home plate. Beyond the outfield fans can see trees, not the skyscrapers and industry of other city-based ballparks. Hadlock was built as a bit of an afterthought in a more residential area, rather than other city ballparks built to be a primary draw to a district.

I had seats down the first base line in the outfield. I was surprised to see netting this far down the line; I’m in favor of extending the netting at most parks up to the end of the dugout, but at this distance it seemed a bit unnecessary. The view of the infield wasn’t bad, though I struggled to see some of the plays out in right field. Finally, for fans going to evening games at Hadlock Field, I’d highly recommend seats on the third base line. The sun was right in our eyes for most of the first game, and the seats on the third base were both in shade and a little more protected by the wind.

The concourse looks and feels simplistic, but there’s something nice about that. It is well away from the action though; you can’t keep an eye on the game while you wait in line for food. Speaking of food options, Portland has most of the standards, though when in season they do offer lobster rolls. 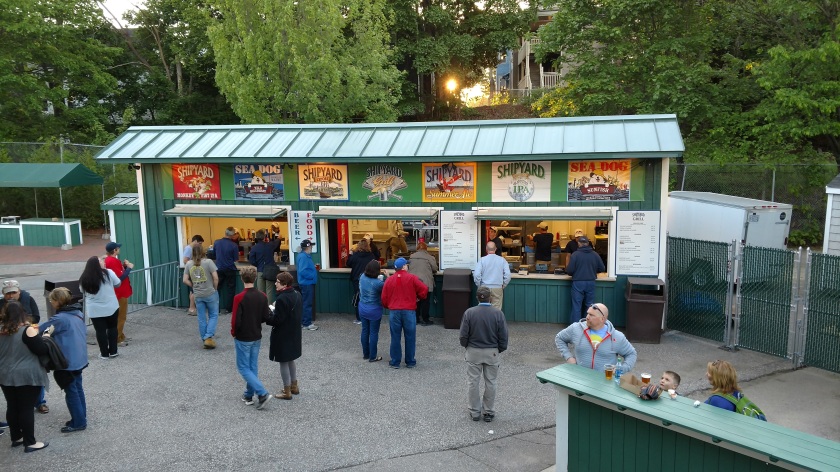 It’s in the beer options where Hadlock Field excels. On the third base line, the main drinks option is the Shipyard Grill. Shipyard is a local Portland brewery, and has at least 6 different drafts on tap. At the other end of the ballpark is another, smaller stand with local craft beers like Sea Dog brewery. If you enjoy cracking open a cold one at the ballgame, Hadlock Field is the place for you.

My colleague Brett Hall is a connoisseur of minor league ballpark team shops, but he might not enjoy the shop at Hadlock Field; or, rather, the small shack.

Besides the standard ballcaps and a few other clothing items, the souvenir “shoppe” was pretty underwhelming.

For someone used to a big-city ballpark like Detroit or even Cleveland, Hadlock Field will feel a bit less exciting and advanced. But it fits the city of Portland and the state of Maine, famous for being a more slow-paced, vacation area. Hadlock Field is a perfect example of the idea that the ballpark must fit the city. Hadlock Field brands itself as “Your Nine Inning Vacation;” a bit cliche, perhaps, but entirely accurate for this understated, down-to-earth ballpark.