Scott’s Thoughts: If you get a chance to go to Fenway (and if you call yourself a baseball fan, you really have to see a game there), don’t just visit the ballpark: experience it. Explore the area around the ballpark. See every nook and cranny in Fenway—and believe me, there are a lot of them. And sing “Sweet Caroline” at the top of your lungs in the middle of the eighth inning, just like everyone else drunk and sober alike in the ballpark.

If you’re looking for food before entering Fenway, you’ve got a few good options. The Tasty Burger is a down-and-dirty 1950s-style diner, offering burgers, dogs, and beer at a reasonable price. On this visit, though, I went to the Citizens’ Public House and Oyster Bar. It’s a bit more refined, with a large selection of whiskeys, bourbons, and seafoods. On game day, the place is packed with Red Sox jerseys and ballcaps. If you’re there, get the burger—hands down one of the best I’ve ever had.

Tasty Burger and the Citizens’ Public House are just a 5 minute walk from Fenway, but before you enter the park you need to walk through Yawkey Way:

It’s the American sports fan’s version of a European art market. They’ve got beer stands, they’ve got food vendors, and they have souvenir shops—including the Red Sox official team store. It reminded me a lot of Eutaw Street by Camden Yards in Baltimore. I absolutely love the concept: block parties on streets next to the baseball park. If every park in America had this, I would be a happy baseball fan indeed.

And, finally, we come to the inside of the park itself: 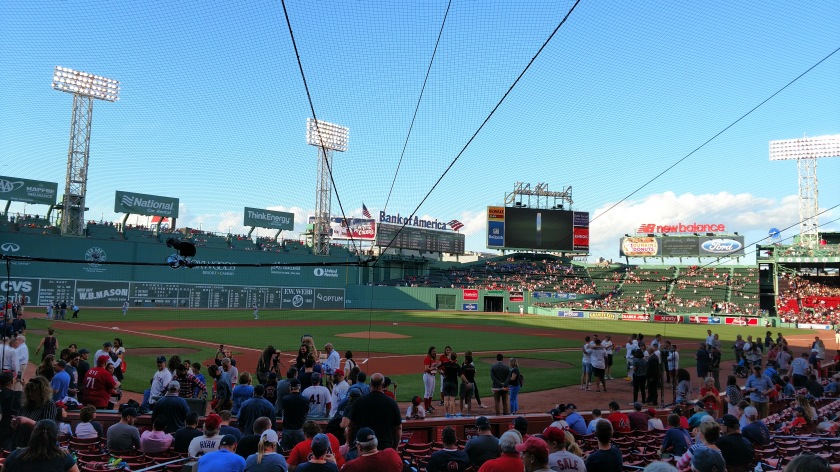 The stories of the park are the stuff of legend. The Big Green Monster in left. The Fisk Pole in right. The old-school, manually-changeable scoreboard—one of the only parks that still operates their scoreboard by hand. Fenway stands as an homage to baseball’s past and to generations of players and fans that have walked through the concourses to cheer for the Boston Red Sox.

The park is over one hundred years old now, which gives it more than a few quirks. Modern ballparks have main concourses that lead right out into the field; larger ones have an upper-deck concourse as well. Fenway’s design is not so clean and precise. Most of the food and drinks vendors are on the lower level, below the main level of seats. Getting to the nearest bathroom to my seats required walking down an auxiliary staircase and across a balcony. Fenway is as much of a labyrinth as it is a shrine to baseball. In a modern park, the organizational design would be a nuisance; here, though, it feels genuine.

Fenway looks to the future of baseball viewing as much as it takes from the past. Fans can now sit on top of the Green Monster to watch a game—though getting your hands on one of these tickets requires entering a raffle before the season. Some areas of the park have eschewed small vendors for full-size bars and restaurants, like the Ketel One bar down the third base line.

On the upper levels, Fenway even has their own farm, which supplies a number of the food vendors at the park. Fenway Park has found the perfect marriage of honoring the past while being on the cutting-edge of urban stadium development.

I firmly believe that one of the best ways to know the character of a city is to know their baseball fans. Boston fans have come under fire this year after Adam Jones was racially taunted at a game in Fenway Park. Other players added their own concerns about racial abuse occurring in the confines. Such behavior is detestable and has no place in a ballpark, in this or any day and age, and I am glad to hear that the Red Sox organization and Major League Baseball are enacting strict punishments against unacceptable fan behavior.

On Friday night, I didn’t witness any untoward fan behavior; on the contrary, I was blown away by the Fenway Faithful. I have never been in a ballpark where the fans were more knowledgeable and engaged. They cheered for every strike thrown by a Boston pitcher. They gave Dustin Pedroia a standing ovation on his return from the DL. The eruption throughout the stadium when Jackie Bradley hit the go-ahead homer in the eighth felt like a playoff baseball atmosphere. I may have been rooting against the Red Sox in this one, but it was hard not to be impressed by the devotion of the fans at Fenway. There are few fan bases more passionate and devoted to their team. 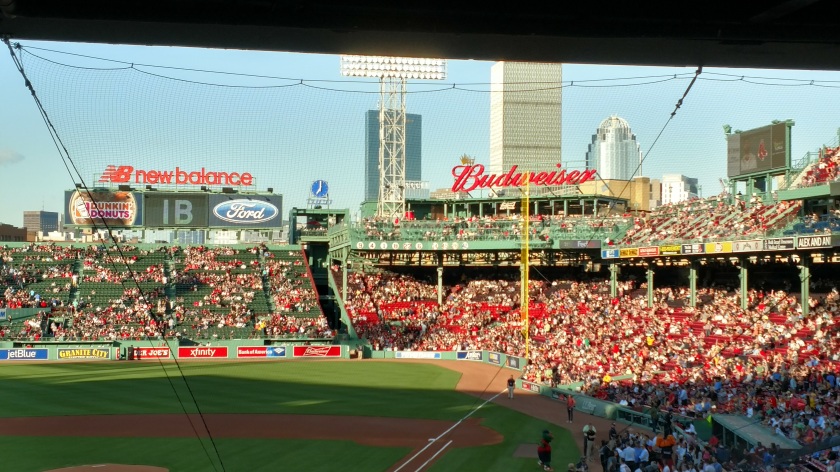 If Fenway Park isn’t on your baseball bucket list, it needs to be. No stadium I’ve attended marries history, urbanism, and love of the game quite like Fenway Park. It is more than a stadium; it’s a shrine to baseball past, present, and future.