After we got back from San Diego and (mostly) got over our hangovers, we headed north to Lancaster to take in a game at the Hangar!

Before we got to the ballpark, we got dinner and beer at Kinetic Brewing Company in downtown Lancaster. It’s a pretty downtown area, with a walkable strip of downtown shops and business with plenty of parking to accommodate out-of-town traffic. The food and beer at Kinetic were solid, but I was shocked to hear that they didn’t have any IPAs on tap. Much is made of the American craft scene’s obsession with the India pale ale, and it’s nice to find a brewery that doesn’t focus on IPAs for a change, but I would have expected at least one hop-buster on tap. As it was, their Ignition pale ale was a quality fallback, a standard pale ale with a good hop character.

The flow with the leg kick. Bronson Arroyo is that you out there? #pleasecomeback pic.twitter.com/Xq2zpXaMJR

This matchup between the Jethawks and the visiting Rancho Cucamonga Quakes began as a rare pitchers’ duel between Matt Dennis and Bronson Arroyo look-alike Dustin May. The Jethawks were consistently putting runners on base, though, and they finally brought a man home on Carlos Herrera’s solo home run to lead off the third inning. One run was all Dennis needed as he fired seven scoreless frames for Lancaster, striking out five and allowing just four hits with three walks. His teammates had staked him to a 4-0 lead by the end of the seventh inning.

Then the bullpen happened.

Jethawks’ reliever Alexander Guillen came in to start the eighth, and gave up three straight home runs followed by a walk. Ben Bowden came on to relieve him, but allowed the tying run to score despite recording an impressive three strikeouts. The ninth inning was no better for the home side. Rancho Cucamonga added four more runs, including two home runs, off Bryan Baker. The Jethawks went quietly in the ninth, leaving the Quakes with the comeback victory.

I so wanted to like this ballpark. And truth be told, there are impressive parts. The entrance to the Hangar is one of the best in baseball, with a fighter jet lording over the gates.

Inside the stadium, I was less impressed. The ballpark felt far away from the rest of the city–the nearest sign of civilization was the highway and a sign advertising used RVs. The Pilots’ Pavilion in left field could be ideal for large groups, but for individual fans like us there didn’t seem to be many points of interest in the park. I do appreciate the hand-operated scoreboard in right field, and the front row seats down the first- and third-base lines offered excellent close-up views of the bullpens, but there was little else I found to like at this ballpark.

When Brett and I visited, Lancaster was working on renovations to get their park ready to host the California League All-Star Game later this summer. There was no electronic scoreboard, for example. I’d be curious to see if there renovations extend beyond the addition of the new scoreboard; until I visit again though, I’m afraid the Hangar was one of the more disappointing ballparks I’ve visited. 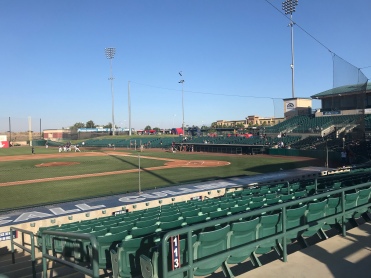 While it seemed like it was a nice facility, it definitely felt out of place and bland. It was right along the highway and right next to a hotel and shopping complex. It definitely didn’t feel like it was the right place for a ballpark. They had space for large groups and for kids, but other than that there weren’t many perks for just the average fan. There really wasn’t a bad seat in the house, however.

Now, one thing I did like was the freedom of the park. We could bounce around to any part of the park that we wanted and no one was going to say anything to you. We started the game behind home plate, but ventured to the left field bullpens to hang out with the Quakes relievers. It offered us a great opportunity to see pitchers up and close and listen to their conversations with other players.

As Scott already stated, the ballpark was getting a new scoreboard when we visited to prepare for the California League All-Star Game. While it is nice that the park was getting some work, it would have also been a great opportunity to update the rest of the park as well to add some character. Overall, it is a decent park. It is definitely not my favorite, but I do feel that this ballpark is enough of a blank slate where you still have a lot of potential to add some character to it. 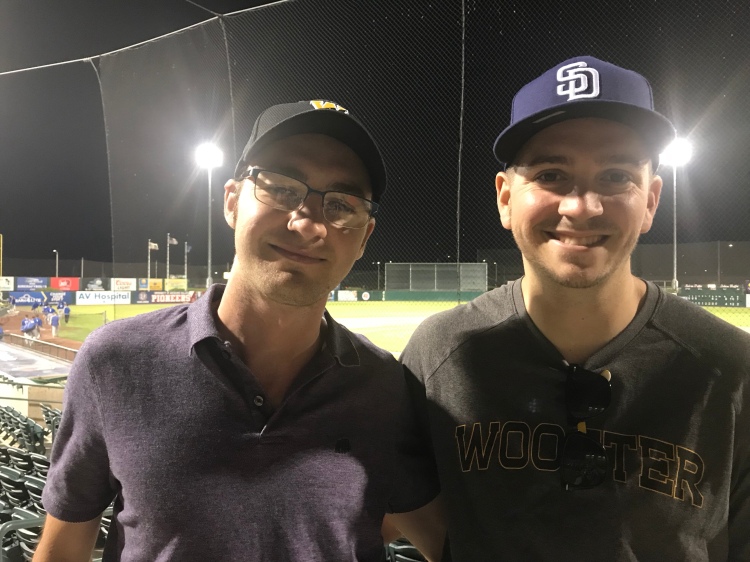