It’s a Monday in mid-April, but it sure feels more like mid-winter than early spring. Time to crack open another Case of the Mondays from Standing Room Only to help you get through the (third? fourth? fifth?) winter of the year with dreams of midsummer nights at the ballpark.

If you’ve been wondering where the warm weather went, you’re not alone. Nearly 20% of scheduled games thus far this season have been postponed due to weather. We’re entering the third full week of play, and so far we’ve only had three days where every major league team is in action.

On Sunday, six games were rained/snowed/sleeted out, including a doubleheader between the Yankees and the Tigers. Three out of four games between the Twins and the White Sox were snowed out in Minnesota.

The weather has created disparity in the standings. Warm-weather teams like Arizona and Oakland have played over 15 games with no rain-outs. Meanwhile, the Twins have only played 11 games after four postponements, and the Tigers have been postponed six times.

What’s worse is that there have been a number of games that should have been postponed. How about the scenes in Chicago on Saturday?

Or the scenes in Pittsburgh last week, when the Minnesota Twins came to town?

The Red Sox even gave out free hot chocolate to the fans during Sunday’s game at Fenway, where temperatures sat around the mid-30s.

The @RedSox just announced free hot chocolate in the stands.

Who would have thought that three weeks into the season, the New York Mets would still have the best record in the National League?

It’s more than just staying healthy. The pitching staff has been dominant, leading the league in staff-ERA with a mark of 2.58. Noah Syndergaard has looked like “Thor” again, striking out 33 batters through 21 1/3 innings. Jacob DeGrom has picked up where he left off last season, allowing six earned runs in his three starts. 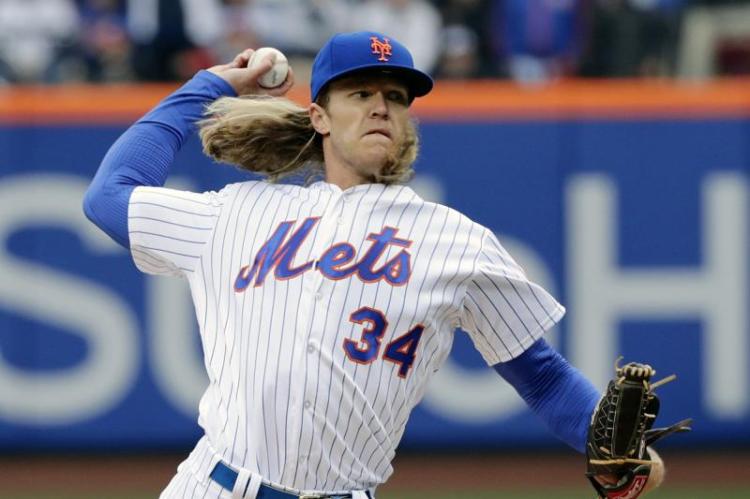 The key to the Mets’ dominance has been the bullpen. Across 53 2/3 innings, they’ve only allowed 9 runs. Closer Jeurys Familia has yet to allow a run. Ditto with AJ Ramos and Jerry Blevins. Converted starters Seth Lugo (eight innings, one run) and Robert Gsellman (8 1/3 innings, one run) give first-year manager Mickey Callaway flexibility in the later stages of the game.

The offense has been average (sixteenth in runs scored, ninth in OBP), but they always seem to find clutch hits from the unlikeliest places at the most important times. Take Sunday’s game against the Brewers. Right fielder Brandon Nimmo went 3-5, scoring the Mets’ first two runs, and was a double away from the cycle. Local hero Wilmer Flores hit the walk-off home run in the ninth to give the Mets their twelfth win of the season.

Mets fans are already fantasizing about October baseball, but they shouldn’t get their hopes up just yet. The pitching staff–both out of the rotation and the bullpen–are elite, but how deep can their staff run if injuries hit? And how much longer can the offense keep hitting in clutch situations? The Mets are a talented team, but despite the early-season indicators their division rivals in Washington still have a more talented roster.

Well, for one of us, anyways; I was at Hadlock Field on Friday night for the Portland Sea Dog’s home opener against the Binghampton Rumble Ponies. The Sea Dogs came into the game with an unsightly 1-5 record, but the home-cooking helped propel Portland to a 4-2 victory.

Maine in April is usually cold, but the Sea Dogs lucked out with the weather on Friday night. It was the warmest night this year (meaning it was in the high-40s), and the projected rain showers largely held off.

It was a star-studded event (by MiLB standards, anyways). Red Sox southpaw Drew Pomeranz made a rehab start for the Sea Dogs, going 5 1/3 innings while allowing 2 earned runs. He faced off against probably the most famous minor-leaguer in baseball today, former Heisman winner Tim Tebow. Tebow went 1-4 with two strikeouts, but was thrown out trying to stretch his single into a double.

I wrote a review of Hadlock Field last summer, but a quick review for those of you who are too lazy to click the link (I know who you are). It feels like a “get-away” ballpark, a park you visit while on vacation; indeed, the team advertises Hadlock Field as “your nine inning vacation.” The on-field aesthetics fit this billing perfectly, from the slightly-not-as-Big Green Monster in left field to the LL Bean boot over the right field fence. It’s a quaint little ballpark, one that has a character that fits its hometown.

As for concessions, I have good news and bad news. The good news is the excellent selection of beer. Hadlock Field sports a large grill operated by local craft brewery Shipard Brewing Company. 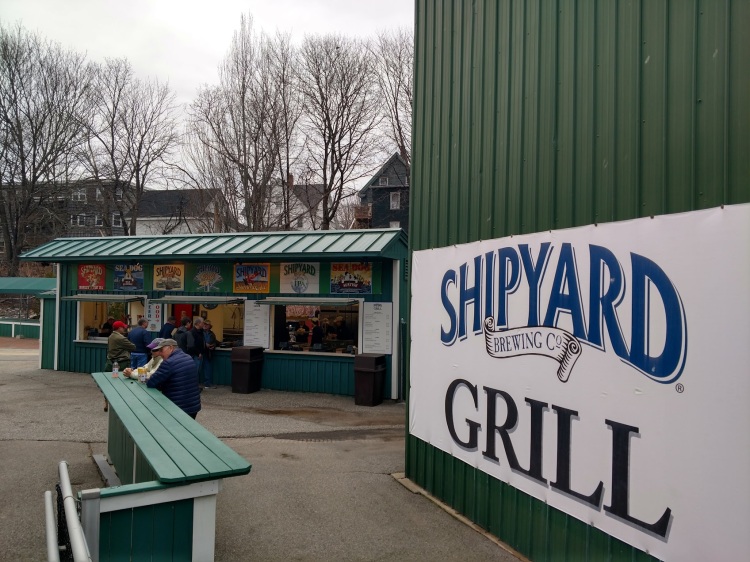 The bad news is the food; it’s the equivalent of what you might find at a high school football game. For example, here was the hot dog I ordered: 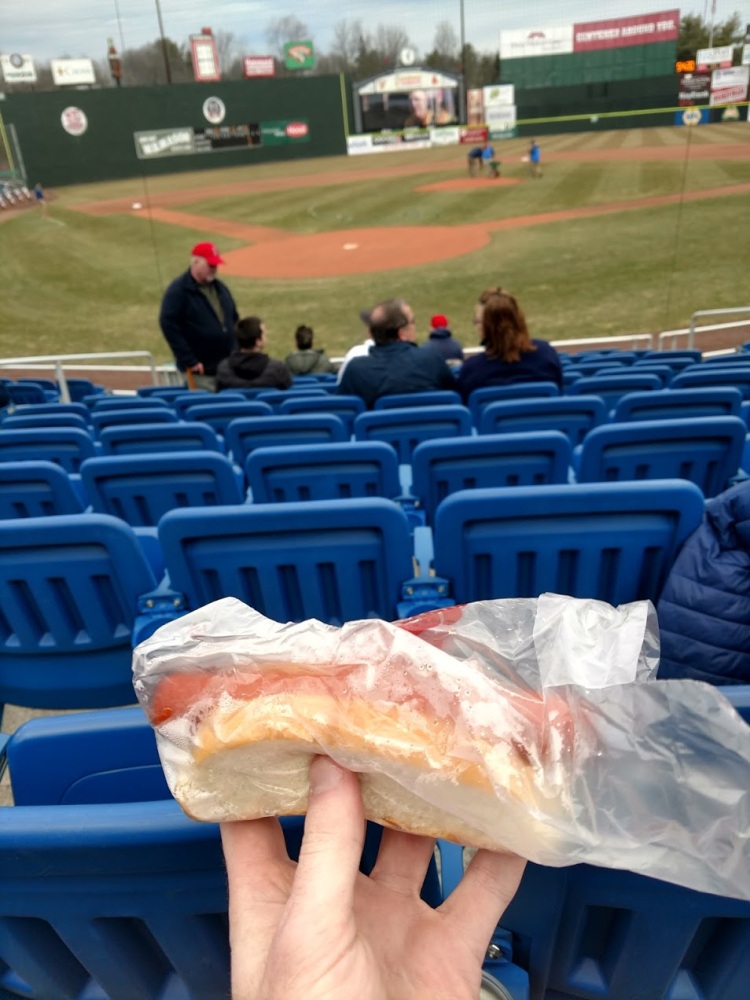 This season marks the 25th for the Portland Sea Dogs, who without a doubt remain Maine’s most popular sporting franchise (outside of the professional teams down in Boston). Even on a rather chilly night, Hadlock Field drew a sell-out crowd full of families, friends, and–my personal favorites–avid baseball fans who were carefully scoring the game. While Portland will never be mistaken for a “baseball town,” Hadlock Field is a charming small-town ballpark and worth a visit for baseball fans visiting Maine during the summer.

You might recognize the top two names on the home run leaderboard right now.

That screenshot was taken after Saturday’s games, when Mike Trout fought through wind and snow to tie Bryce Harper with this shot:

Not to be outdone, Harper launched a solo shot off Tyler Anderson, his seventh of the year, to retake the major-league lead.

Trout and Harper are two of baseball’s biggest stars; seeing them go back and forth all summer for the home-run lead would be a spectacle worth tuning in for every single night.

Sunday was for aces. In the early slate of games Noah Syndergaard stole the show, going 5 1/3 innings while allowing just 2 hits and striking out 11.

He had all of his pitches going. His fastball darted like a slider:

This is seriously ridiculous. pic.twitter.com/5z3DRJAOEW

But this sinker…it’s something only an Asgardian could do.

It's looks like he's throwing a pitch in a tornado. pic.twitter.com/6GzYdMQXPy

If Syndergaard was the matinee, Clayton Kershaw was the evening entertainment. In the late-afternoon game against the Arizona Diamondbacks, he scattered two hits across seven innings, striking out twelve.

Of course, with Clayton Kershaw, it was all about the curveball.

Someday, this will be on loop in Cooperstown, or have its own wing. pic.twitter.com/egJ7BQi2Fs

I never was much good at physics, but I didn’t think baseballs were supposed to be able to move like that.

(all GIFs courtesy of @PitchingNinja)

Sunday was Major League Baseball’s annual Jackie Robinson Day, commemorating the day in 1947 when Jackie Robinson became the first black man to step onto the diamond for a MLB team.

There is no celebration across sports quite like Jackie Robinson Day, simply because there was no athlete quite like Robinson. The prejudice he faced both on and off the field is unfathomable; he received death threats just for wanting to play a game. Of course, what Jackie did extended far beyond just the game of baseball. Robinson was a civil rights activist before the Civil Rights Movement, a man who fought for himself and his kind without being able to raise his fists in anger.

Robinson was of course influential for breaking baseball’s color barrier, but often lost in his story is just how good a ballplayer he was. The season he broke the color barrier, he was voted the Rookie of the Year. Two years later, he was named the MVP, and selected to the All-Star team.

At it’s core, the Jackie Robinson story should remind us of this simple truth: baseball is for everyone, regardless of race, nationality, or gender.

One of the highlights of the 2018 season will come this week, as the Cleveland Indians and Minnesota Twins will play a two-game series in Puerto Rico. It will be a warm homecoming for Puerto Rican stars on both teams like Francisco Lindor and Jose Berrios.

Shohei Ohtani was scheduled to start on Sunday, but–surprise surprise–it got rained out. He’ll next take the bump on Tuesday, facing off against a Red Sox team that currently has the best record in baseball. Sign me up.