Baseball fandom knows two speeds. Either your team is a lock to win the World Series, or they’re on track for the #1 pick in the 2019 MLB Draft.

That idea is more true than ever during the first week of the season. After just 5 games and 3% of the entire regular season, fans and analysts try to decide just how good a team is.

No team’s season is over. The Tigers could feasibly go 159-3 this season. But for some teams, the early signs are a bit troubling. How worried should you be about your favorite team? We rated each team’s panic meter from 0 to 10, with 0 being complete confidence and 10 being total hysteria. It’s early in the season, so only a few teams have high ratings on our panic meter this week.

Boston Red Sox — 2. We all knew Chris Sale was going to dominate (6.0 IP, no runs, 9 Ks on Opening Day). But to see David Price, Rick Porcello, and Hector Velasquez combine for a 1.06 ERA has to be a positive sign for a team that desperately needs a dominant rotation.

New York Yankees — 4. Which Dellin Betances is going to show up this season? The dominant reliever who kept his ERA under 1.50 during 2014 and 2015, or the one who pitched to a 5.59 ERA last September? If the series against Toronto is any indication (3.0 IP, 3 earned runs), he could be a weak link in the Yankees bullpen. Then again, I think they have enough pieces to cover for him.

Toronto Blue Jays — 2. Two come-from-behind wins against division-favorites New York has got to have Toronto feeling good. The rotation survived against the Yankees; Aaron Sanchez and Marcus Stroman are the key to this team making a run.

Baltimore Orioles — 7. For anyone hoping the Orioles could make a run this year, the opening series against the Twins was a splash of cold water. Minnesota took a no-hitter into the 7th inning on Saturday, and Jose Berrios threw a complete game against them on Sunday. Where’s the offense? Just six runs across four games isn’t going to do it.

Tampa Bay Rays — 3. No one has any expectations for the Rays, so it’s hard to panic after a poor showing against Boston–that heroic comeback on Opening Day aside. The excitement of “bullpen day” will have to wait until the weekend, as the Rays were rained out yesterday.

Chicago White Sox — 0. It’s a building year on the South Side, and everyone likes building around 3 home runs on Opening Day from Matt Davidson. Lucas Giolito had a strong start to his season as well, throwing 6 innings while allowing 3 runs. Sure, the 2-0 start came against the Royals, but if you look hard enough, you can see the future of a playoff team here. Just not this season.

Minnesota Twins — 1. While it’s never fun to lose a player for half the season, Eduardo Escobar looked strong this weekend at shortstop filling in for Jorge Polanco (suspended 80 games for PED use). How good can Jose Berrios be this season? 9 innings and no runs in hitter-friendly Camden Yards could point to a big year for the young Puerto Rican.

Cleveland Indians — 1. Francisco Lindor and Jose Ramirez will get it going soon. But how about Yonder Alonso jacking a grand slam against his old team in Seattle? He might not fully replace Carlos Santana, but he can more than hold his own in the lineup.

Detroit Tigers — 5. Everyone knew this team was going to be bad, but seeing it on the field was painful–even though they should be 2-2 right now. Miguel Cabrera looks primed for a bounceback year, but the lineup beyond him and Nicholas Castellanos looks inept, and the Tigers bullpen looks like a Comerica Classic. 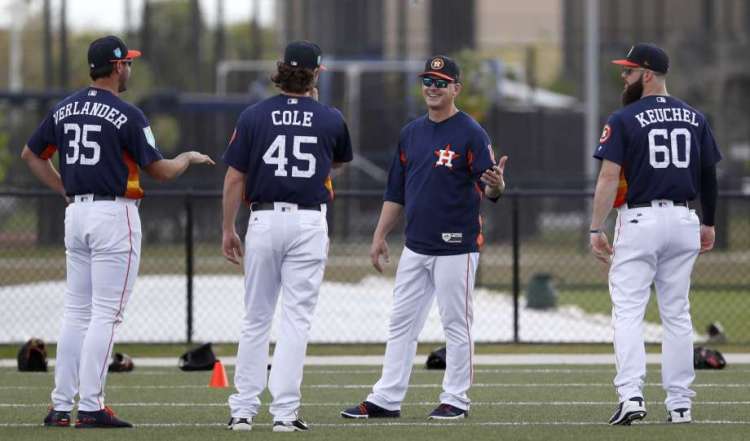 Houston Astros — 1. This rating will jump to a 4 if Carlos Correa is forced to miss significant time after leaving Monday’s game with a toe injury. The rotation of Justin Verlander, Dallas Keuchel, Lance McCullers, Gerrit Cole, and Charlie Morton will be the best rotation in baseball, and it really won’t be close.

Los Angeles Angels — 4. Shohei Otani dazzled in his debut on the mound, and the new-look lineup featuring Zack Cozart and Justin Upton alongside Mike Trout will put up runs. But the Angels need Matt Shoemaker and Garrett Richards to pitch under a 3.75 ERA if they want to play into October, and neither looked capable of that this weekend.

Seattle Mariners — 5. It was an emotional opening series in Seattle with the return of Ichiro and an exciting Opening Day victory against the Indians. How much time will Nelson Cruz, Ben Gamel, and Mike Zunino miss? Seattle doesn’t have enough depth to suffer a season of injuries like last year.

Oakland Athletics — 3. The lineup anchored by Khris Davis is going to hit a lot of balls out of the park this season. Can the rotation keep up? They’ll have plenty of time to work out their struggles in what should be a building year by the Bay.

Texas Rangers — 4. It’s always tough to start against the defending champs–especially when they pull the old “four-men-in-the-outfield” trick. The Rangers need to do a better job of getting on base–as a team they’ve posted just a .268 OBP. Can the journeyman rotation of Doug Fister, Mike Minor, and Big Sexy put together a solid season? They’re off to a good start.

Washington Nationals — 0. Ho-hum, the starters only gave up two runs and the lineup scored 21. Did anyone forget about Adam Eaton? After returning from a torn ACL he’s 8-13 with 7 runs and 2 homers. Bryce Harper has more home runs in his last 4 at-bats (3) than seven different MLB teams. The Nationals are the only thing in DC you don’t have to worry about–unless you’re a Mets fan.

Atlanta Braves — 1. The offense is currently leading the NL with a .325 batting average. After a rough rookie campaign Dansby Swanson looks set for a much-anticipated breakout–he’s 5-14 with two runs. Just wait until these young arms make it up to the bigs later this season.

New York Mets — 4. How about that offense? New manager Mickey Callaway is pushing all the right buttons as his team put up 16 runs with a .306 batting average. Baseball fans everywhere rejoice: Yoenis Cespedes and Noah Syndergaard look healthy. So why is the panic meter so high? Steven Matz looked a shell of himself, and Matt Harvey hasn’t pitched yet.

Miami Marlins — 1. THEY’RE NOT AS TERRIBLE AS WE THINK! Despite gutting the roster the Marlins looked genuinely competitive for much of their series with the Chicago Cubs, a team tipped by many to win the NL Central. Credit to manager Don Mattingly for getting his team ready to play in front of a justifiably-pessimistic fanbase.

Philadelphia Phillies — 9. 21 pitchers for 29 innings. Bullpenning is all the rage among sabermetricians and analysts, but you need a strong, deep bullpen to pull it off, and Kapler doesn’t have that in Philadelphia just yet. It’s not quite as bad as Philadelphia sports talk radio hosts are making it out to be…but it’s pretty bad.

Pittsburgh Pirates — 1. Sure, the win on Opening Day was a gift, and yeah, the first three wins came against the Tigers. But who am I to argue with a 4-0 record? The Pirates put together timely hits as they downed the Tigers. The floor for this team isn’t as low as you think it is…

Milwaukee Brewers — 4. The big signings of the offseason are off to great starts. Christian Yelich and Lorenzo Cain are a combined 16-36 with 5 extra-base hits and 8 runs, helping the Brewers start 3-1. No thanks to the starting rotation, though; they’ve given up 13 runs across 20 innings. Back-of-the-rotation starters like Brent Suter and Jhoulys Chacin will be the keys for the Brew-Crew.

St. Louis — 5. Again, it’s only the first series. But having Carlos Martinez, Michael Wacha, and Miles Mikolas get roughed up by a Mets offense that’s not exactly potent isn’t the start to the season Cardinal fans were hoping for. Paul de Jong looks set to build on an impressive rookie campaign (3 homers in 15 at-bats), and Jose Martinez is making it hard for Mike Matheny to keep him out of the lineup.

Chicago Cubs — 8. Against the Marlins and the Reds, the vaunted Cubs offense has managed just a .204 batting average, with a .137 average with runners in scoring position. They’ve broken the record for most strikeouts in five games in NL history with 58. Has Lester reached the twilight of his career? He struggled with his command on Opening Day, walking three batters and striking out only two while allowing 4 runs (3 earned) across 3.1 innings.

Cincinnati Reds — 2. Reds fans are already settled in for a long year of mediocre baseball. The pitching staff is already dead last in the National League in ERA, and that includes Homer Bailey’s strong Opening Day start (6 innings pitched, only one earned run). At least Scooter Gennett will be fun to watch–he’s started the season 4-12 with a home run. 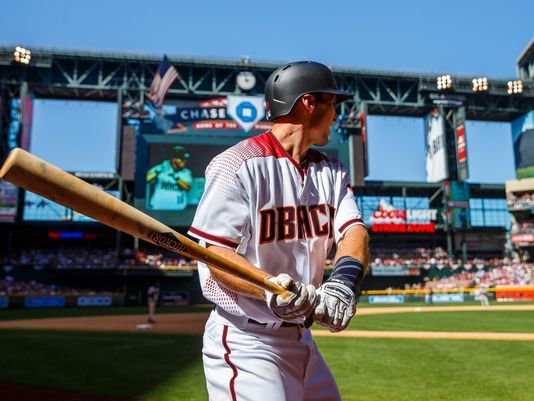 Arizona Diamondbacks — 2. Paul Goldschmidt was hitless in his opening series, but he’ll get it going. Ugly starts from Robbie Ray (5 innings, 7 runs) and Taijuan Walker (3 runs in just two innings) shouldn’t cause much concern either; they’re both solid, if inconsistent pitchers. A series win against a tough division rival is never a cause for complaint, and a come-from-behind win against the reigning NL champion is a good sign too.

Los Angeles Dodgers — 6. Finally, some offense! The bats still looked stuck in their World Series funk in the first two games against the Giants, both 1-0 losses, but bounced back on Saturday and Sunday. The impressive depth in the Dodgers roster will be tested with the extended absence of Justin Turner; Logan Forsythe has already made three errors at the hot corner. Kenley Jensen will look like Kenley Jensen again soon…right?

San Francisco Giants — 8. If not for Joe Panik and an anemic Dodgers offense, the Giants would still be winless. Their only two runs on the season have come on Panik’s two solo home runs. Major offseason acquisitions Evan Longoria and Andrew McCutchen are a combined 1-31. How soon can Bumgarner get back?

Colorado Rockies — 4. The Rockies played three strong games against the Diamondbacks, even if they only got one win to show for it. Tyler Anderson and Chad Bettis got roughed up in their first starts; Colorado needs them to get back on track if they want to keep pace in a tough division.

San Diego Padres — 5. The good news: new acquisitions Eric Hosmer (4-12) and Freddy Galvis (5-12) are off to solid starts. The bad news? The team they joined is bad, and they continue to be bad (a combined .180 average). Just wait until the prospect volcano erupts.