A new baseball season means a new season of Standing Room Only’s “Case of the Mondays,” a weekly blog post to catch you up on all the storylines and action from the weekend in Major League Baseball.

Opening Day 2018 was delayed by a day in Detroit due to inclement weather, but when it arrived it came in like a tornado.

It wasn’t an instant classic; the teams have to play good baseball for that to happen. It was more like watching a trainwreck; everything was terrible, but you just couldn’t turn away from the carnage.

That’s where it really went off the rails. In the bottom of the 10th inning, it appeared that Tigers RF Nicholas Castellanos had crossed home plate before Pirates C Francisco Cervelli applied the tag, giving the Tigers a walk-off win. The replay review seemed a mere formality; the Pirates even walked off the field, thinking the game over.

You know where this is going. The call was overturned, Tigers manager Ron Gardenhire was ejected–in his first game as Detroit’s manager–and the game trudged on.

Ron Gardenhire has been ejected from today's game — his first of the season.

It wasn’t until the 13th inning, though, that we finally saw the game’s first home run off the bat of Gregory Polanco. The Tigers were unable to respond in the bottom of the 13th, giving the Pirates a ridiculous 13-10 win in a game that featured 31 hits, 5 defensive errors, and our first “weird baseball” of 2018.

If more is good, weirder is better.

Later on Friday night, the Cubs played the Marlins. Both teams plated a run in the 3rd inning. After that, the bats went cold, and stayed cold.

The game remained 1-1 into the 10th inning…then the 11th….then the 12th…. It remained scoreless past midnight, which meant it was time for the Marlin’s bedtime.

The energy at Marlins Park, as is always the case among the die-hard Marlins fanbase, was electric:

In the end it was Miguel Rojas who decided he was done with baseball for the night–er, morning–and walked it off with a RBI single.

Two days in, and we already have #WeirdBaseball. It’s good to be back.

Came on the very first pitch of the season, courtesy of Cubs’ CF Ian Happ.

It was a fitting start to the season for the Marlins, whose Opening Day Roster sounded more like a list of audience members for Wheel of Fortune than a roster of professional baseball players.

Plenty have been critical of the Marlins’ “rebuilding” efforts, but none more so than ESPN’s Dan Le Batard, who took no prisoners in this interview with Rob Manfred earlier in the offseason. His radio show covered Miami’s Opening Day live, and their reaction to the lead-off home run was priceless.

4. Can I Get Another Pitcher, Please?

I can’t imagine the stress and pressure of managing your first series in the Major Leagues. But I can imagine that this was not the start to his managerial tenure that Gabe Kapler wanted.

After his team jumped out to a 5-0 lead over the Braves on Opening Day, Kapler pulled his starter Aaron Nola after 5 1/3 innings and just 68 pitches. His bullpen leaked 8 runs, including a walk-off three-run homer to Nick Markakis.

"You gotta be kidding me!"

The real embarrassment came on Saturday night. Starter Vince Velasquez labored into the third inning, but was pulled after inducing a fly-out from Ozzie Albies. Kapler left the dugout and pointed to the bullpen…but no one was warming up.

Reliever Hoby Milner frantically fired off a few throws in the bullpen before jogging out to the mound, while Kapler stood on the mound trying to stall for more time. Braves manager Brian Snitker came out to complain about the additional warm-up time offered to Milner, and was ejected by crew chief Jerry Layne. In his postgame interviews, though, Layne clearly sympathized with Snitker.

“For whatever reason the pitcher wasn’t even getting ready,” Layne said after the game. “Who got crossed up, I’m not placing blame on anybody because I don’t know. He just wasn’t ready. Hadn’t thrown a pitch. … The last thing I want to do is get somebody hurt. It’s already a messed-up situation.

“Whoever’s at fault on the Phillies’ side should have to answer to Major League Baseball.” 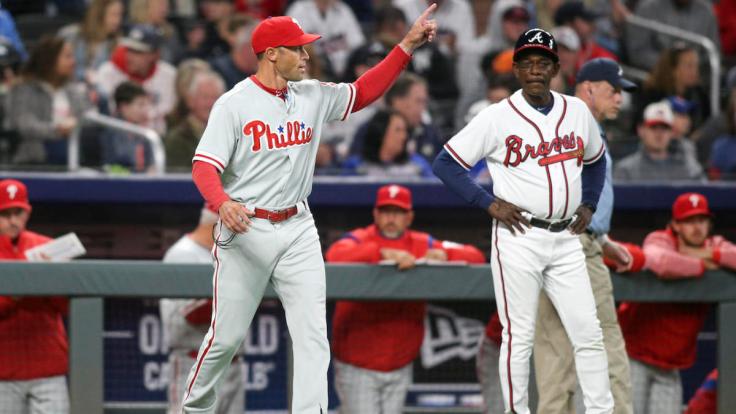 Kapler admitted that there had been “miscommunication” regarding the bullpen, but it’s an ugly look for a manager who’s already come under fire for his excessive reliance on his bullpen. Over 3 games and 29 innings (Friday’s game went into the 11th), Kapler has used 21 pitchers. He’ll have plenty of time to practice his finger-waggle-to-the-pen in the future.

The young man who’s been called the “Japanese Babe Ruth” had struggled in his first Major League Spring Training both on the mound and in the batter’s box. Some writers had even asked whether he deserved to make the team on Opening Day.

In his first series against the Athletics, he quieted the chorus of doubters, at least for a few games. He went 1-5 with a single on Opening Day as the Angels’ DH, and in his scheduled start on Sunday went six innings, allowing three runs while striking out six. All three runs came on one swing, as he left a slider up in the zone to Matt Chapman.

Everyone will be focused on Otani’s progress all season long. It’s hard to expect him to shatter records in his first season, but his slider had a devilish break to it, and he looked more comfortable in the batter’s box than he has all spring. Otani just might pull off going both ways.

6. If We Needed More Proof That The Ball Is Juiced…