Well, it wasn’t easy, but we made it home. After our connecting flight back to Columbus was cancelled not once, not twice, but three times, we rented a car and drove all the way home. After a few days of recovering and sleeping, it’s time to give you my take on Fenway Park. My dad and I have had this trip planned out since March, so we had a great time not only at the games, but exploring the Boston Area. Scott gave you a ballpark review of Fenway a few weeks ago; so let me give you my review of this historic park.

Fenway Park, built in 1912, is the oldest ballpark in America. When you walk around the park, you can still see the original brick around the façade. The modernization of the park has been done perfectly where fans get the 21st century amenities without hurting the classic ballpark charm. 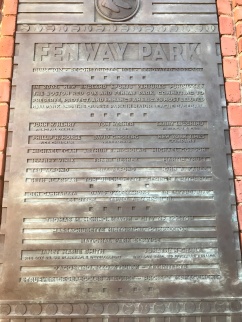 Now, usually when we do a ballpark review, we give you a game recap that tells you when we were there and how exciting the game was. I have decided I will not be doing that because 1) the Indians lost and I am still salty about it and 2) there is a lot I want to cover not just with the park and where to sit, but what places we went to in Boston that can really add to your trip. Here are some of the highlights/tips for your trip to Fenway Park.

(Editor’s note: The end of the game may not have gone Brett’s way, but he was there to see this:

Ballpark Tour: This is a must. Yes it is somewhat expensive ($20 a person), but it really allows you to get a sense of what seating options are available, when changes to the park were made so can understand why the park is designed the way it is, and it is one of the rare opportunities to go on top of the Green Monster. You also get to see a lot of historic artifacts on display throughout the park when you take the tour. 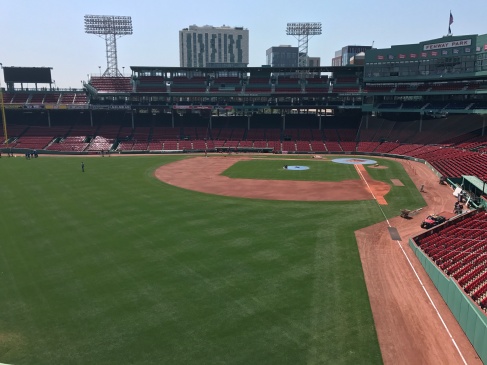 From on top of the Green Monster.

Yes, even the Red Sox have a rooftop garden.

The Bleacher Bar: This one was more of an accident. We left Marion to get to the airport at 5 a.m. so we took a nap and missed the start time of the Kansas City/Boston game that we were debating getting bleacher tickets for. We ended up wandering around the ballpark around the 7th inning and stumbled into the Bleacher Bar. There’s no cover charge and you don’t need a ticket to get in. You can only access it from outside the stadium, but once you go in you can actual watch the game from ground level. 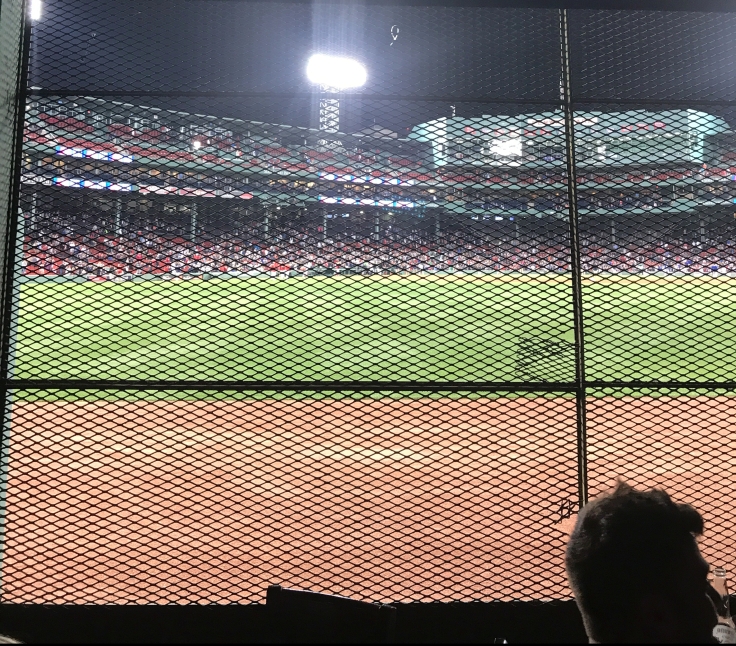 Beer ranges from 4-6 dollars a pint and you can get food. Once of my absolute favorite parts of the bar is the restrooms.

Yes people can see you and you can see them, but at least you’re not missing any of the action!

Yawkey Way: Some things to note about Yawkey Way. During the day, it is just a normal street that you can walk and drive down. Before games, however, the street is shut down and it is turned into concourse space. That is where the team shop is; there are food and beer vendors, live bands, and entertainment there an hour and a half before game time. It is one of the coolest places to go before a game and just take in the sights. All the trees down the street were there before Fenway Park was built, which just adds to the neighborhood feel. One side note, this is where you get your tickets scanned, so it gets very busy since people are waiting to get into the park. The lines are pretty long to get in, so either get their earlier or make sure you have digital tickets through the MLB Ballpark App so you can get into a shorter line.

Seating: Every seating option in the park gives you its own unique experience. We like to mix it up and sit in different places, so the first game we sat behind home plate and the second one we sat in a box in the upper deck. Where we sat behind home plate, there was a lot of foot traffic with people walking in front of us while the game was on. While this may seem annoying, we got used to it very quickly and it didn’t really impact our experience. Check the notes about the seats before you buy because they will tell you if there are obstructions with your seats. The box seats are a unique experience. Your seats come with a menu where you can order beer and food and have it brought to your seats and you have access to a bar behind home plate that is open before and after the game. You feel like you’re right on top of the action and you will get great views of the park no matter where you sit on the upper deck. 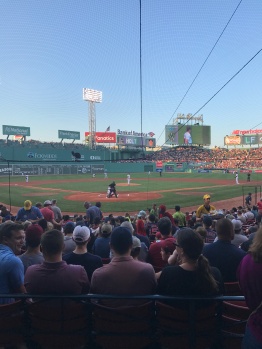 Overall, this is by far my all-time favorite park. It’s a place that I need to explore more and get a sense of all the seating options in the park. Our trip to Boston was not just about Fenway Park. If you are ever in Boston, here are three stops to add to your ballpark adventure:

John F. Kennedy Presidential Library: As a lover of history and someone who works at a presidential site, this was a must stop for us. It is a beautiful facility right on the Boston Harbor near the University of Massachusetts. While at times I was disappointed with the content and displays, I still learned a ton about JFK and was able to see a lot of footage of him that I had not seen previously. 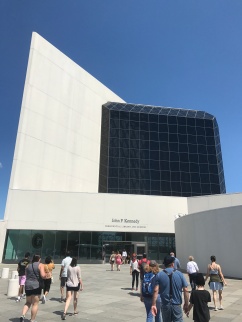 The Freedom Trail: This is a must if you are in Boston. It is a 3-mile walking trail that takes you to different historic sites in Boston. You can see where the Boston Massacre happened, go to the Old Meeting House where the Boston Tea Party was planned, visit the home of Paul Revere, take a tour of the USS Constitution at the Navy Yards, and climb to the top of Breed’s Hill, where the oddly-named Battle of Bunker Hill took place. The best part is that you can go at your own pace and see the sites that you want to see. 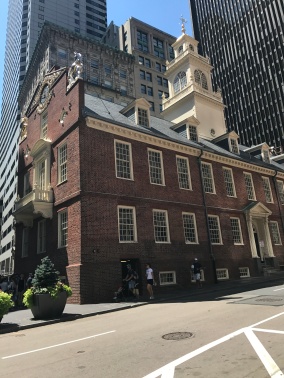 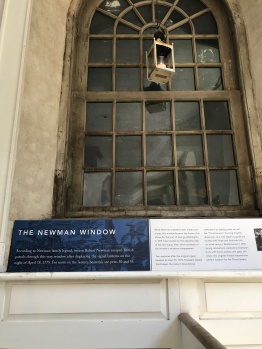 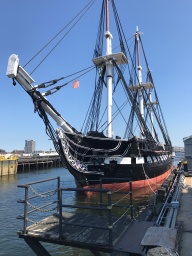 Harpoon Brewery: This is my favorite brewery tour to date. The brewery is right on the docks and features a block party outside every day, a tap room with warm pretzels made from the spent grains from the brewing process, and brewery tours. The beer is absolutely fantastic and it is a great atmosphere. Don’t do the tours of the bigger breweries in Boston. Harpoon will give you more bang for your buck and I enjoyed visiting them more than the famous Sam Adams Brewery. 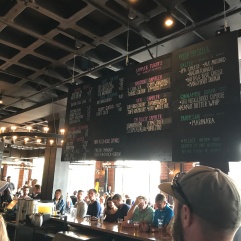 One thought on “Fenway Park and Boston: Round Two”