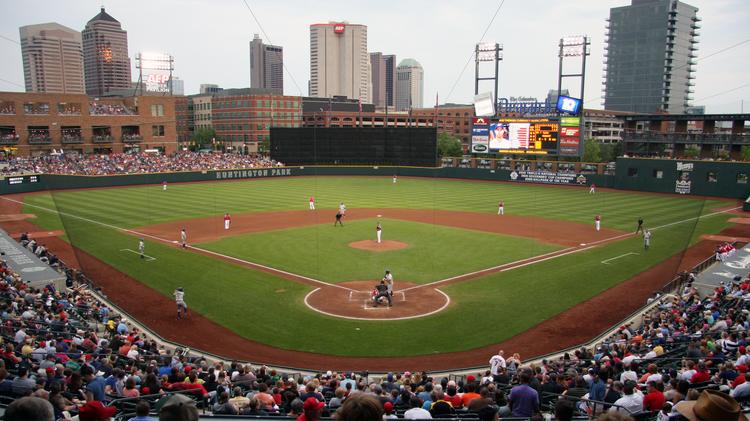 This is one of my personal favorite parks. Being only an hour or so away from my hometown of Marion, Ohio (this, however, will be Scott’s first visit) this park has been a regular for myself the past few years. It’s a newly built park in the Arena District of Columbus, a place that is rapidly becoming a hot spot for businesses and new residents. The park offers a unique blend of intimacy and spaciousness while seating 10,000 fans. The large concourses in left field and down the first base line combined with seats placing fans on top of the action makes this a great place to watch baseball.

Huntington Park is apart of a new age of minor league parks. At the cost of $70 million, the stadium at the corner of Neil Avenue and Nationwide Boulevard added a new cornerstone to a growing Arena District that also includes the home of the Columbus Blue Jackets of the NHL. Upon its completion in 2009, it was named “Ballpark of the Year” by baseballparks.com, beating out New Yankees Stadium and Citi Field, which opened in the same year.

In terms of fan experience, this park offers major league quality in a minor league setting. Lets start off with food and drinks. The park offers the standard ballpark food as you would expect, but there are also some interesting surprises in store. You can get some Tim Hortons coffee if you need some caffeine in your system, or even some of your Bob Evans favorites for those of you (like us) that are going for a morning game and may still be looking for breakfast.

One of the biggest advantages to getting a standing room seat is the variety of options to watch the game from. There are drink rails up and down the left and right field lines. You can also bring a blanket and sit in the grass in left-center field. Want to sit a little higher. You can grab a spot on the drink rails from the second level of the left field terrace. The stadium includes 32 suites, 42 loge boxes, and 650 club seats. Clippers games have become a hub for businesses. The most popular spots in the park are the Wendy’s Hamburger Balconies in Right, which is reminiscent of seating on top of the Green Monster in Fenway, and the third story of the AEP Power Pavillon, which is an open air rooftop with bleachers reminiscent of the rooftop seating of Wrigley Field. With endless seating options, this park allows you to explore a new part of the park every single time you visit.

Huntington Park is a park that is both charming and modern that will get you close to the action on the field. While this is a minor league park, this is a stadium that tops some of parks in the major leagues. If you are ever in Columbus, Ohio during the summer, take a trip to Huntington Park and grab a spot on the rail.