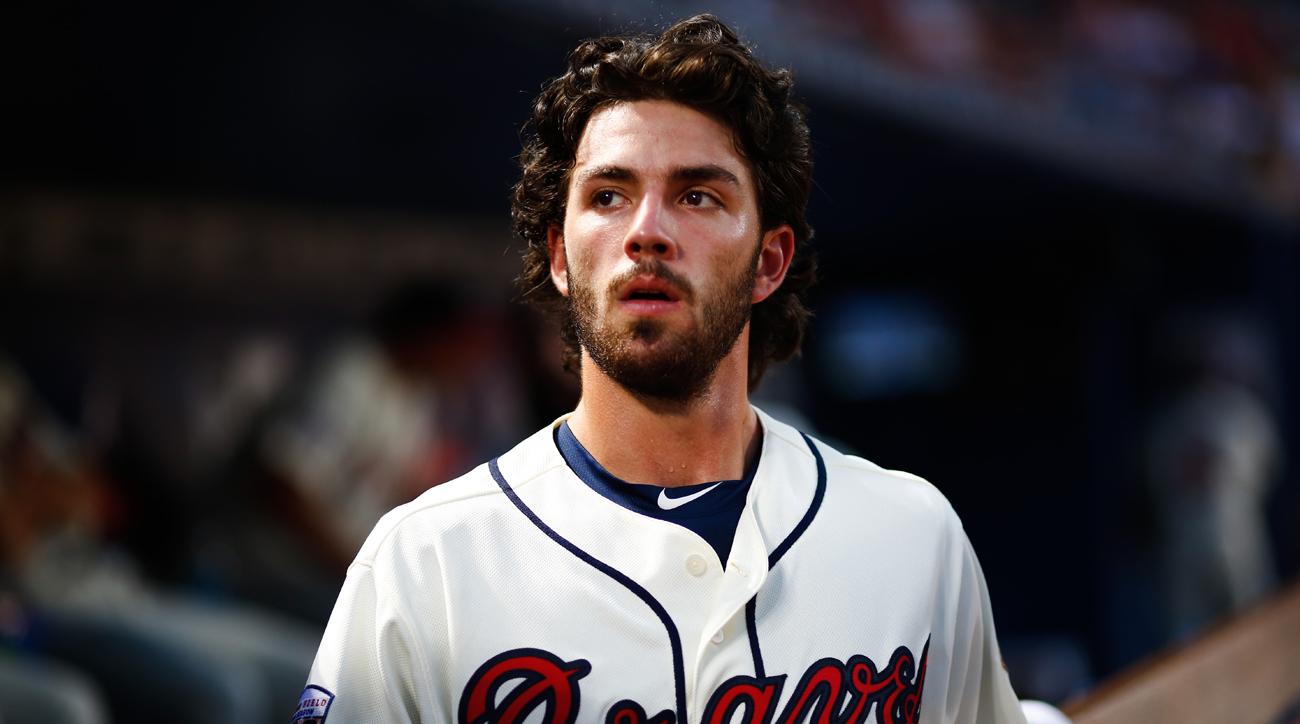 Brett and I are in the same fantasy baseball league this season. I figured it would be an interesting way to foster competition among friends, and to test our baseball knowledge against each other.

We were in the heart of the draft, moving into Round 16. I had been giving Brett advice throughout the evening. He had never been in a league with individual pitchers instead of staffs before, and I was giving him some insight on when to draft what position.  I mentioned that with my next pick, I was looking at Braves rookie shortstop Dansby Swanson. Brett said he was going to get depth at catcher by picking Brian McCann.

With the 153rd pick of the draft, Brett Hall selected…Dansby Swanson.

After some mild fisticuffs and a few choice insults, the affair was settled peacefully. Brett agreed to trade Swanson and his final pick of the draft Matt Holliday (let’s just call it the equivalent of a salary dump) for Giants shortstop Brandon Crawford.

So where does that leave our rosters? We decided that each of us would review the others’ team. I’ll rate Brett’s team, and Brett will rate mine. We had one rule: we had to say at least something nice about the other.

First, some notes about the league. It’s a 10-team league, with head-to-head scoring based on categories. Rosters are 25-men deep, with 6 bench positions and 9 pitching spots (starters or relievers). There are slots for the usual positions along with a DH and a utility slot.

We’ve also benefited from some great statistical analysis work by Jacob Fielder, another member of the fantasy league and a close friend of mine. Jake built off of player projections offered by ESPN to rank the ten teams in each category, then compile those rankings to project each teams’ final position in the league standings.

Throughout the draft Brett kept complaining that he had waited too late to pick outfielders. It doesn’t show in his team. Bryce Harper is a slight risk after a down year, but if he rebounds he could be a fantasy stud. A healthy Marcell Ozuna could crack the top-50 in fantasy this year. If Michael Brantley can return to the form he showed in 2014 and 2015, he could outpace his projections and give Brett a solid outfield. There is some risk here though, particularly if Harper and Brantley underwhelm.

His lineup brings some valuable flexibility. Machado is eligible at both third and shortstop, McCann can fill in on Lucroy’s off-days at catcher, and Gyorko is eligible for most infield positions (though he’s a definite step-down from any of the starters).

Unsurprisingly given Brett’s experience in individual-pitcher leagues, the pitching staff looks to be the weak point in his fantasy team. Noah Syndergaard is a stud, but I have some concerns about Carrasco’s injury history, and Brett has two pitchers from a Blue Jays staff competing in a tough division full of big-time hitters. His relief pitching is also questionable. After Melancon, Brett does not have a bona-fide closer on his team, though Addison Reed and Dellin Betances are both good pitchers for ERA and strikeouts.

Statistically, the projections are not high on Brett’s lineup. He ranks in the bottom-half of the league in every batting category except strikeouts. He particularly struggles in bases categories, ranking 8th in total bases and 7th in hits, and does not have much power or potential for extra bases. Players can always outperform their projections, but it gives Brett a reason to potentially be worried about his lineup as well as his pitching.

“Harding Throwin’ Heat” looks set to put together an average season.They’re not the favorite, and I think this team could be in a dogfight come August to make the four-team postseason. If Brett is active on the waiver wire, particularly in regards to relief pitching and base-hitters, he has a chance to come out on top.

Brett’s Response: While yes, stealing Dansby Swanson was rude, it was worth being a troll (even if it meant taking a shot or two from Scott’s raging fists). In all seriousness, I disagree with Scott’s take on my starting pitching. I think that my rotation will exceed expectations with a monster year from Carrasco and solid relief pitching from Betances and Reed. In terms of my outfield, while I agree that I was able to get Harper, Ozuna, and Brantley (the latter only playing 11 games last year) I felt that I waited too long to build the depth on the bench needed to overcome the loss of Brantley if he can’t find his way back to the field this year.

Following the first overall selection of Mike Trout (literally the easiest pick in the draft), the issue for Scott was what to do with his next pick. Because it was a snake draft, Scott’s next pick would not be until 20th. Scott did not disappoint selecting the second-best shortstop in the game in Carlos Correa (sorry, Francisco Lindor is better) and building a pitching staff that offers depth and high strike out numbers.

His team should lead the league in home runs as his entire starting lineup can hit bombs except for Eaton and Realmuto. The combination of his pitching staff and the big power numbers that his lineup will put up should place him at the top of the pack for a playoff spot.

There are two big concerns with his team. The first comes down to his lineup in general. He will lead the league in home runs, but this league is built around other categories. This will cost him points and quite possibly one of the top overall seeds come playoffs. The second big hole is his depth. While he does have a solid backup for Realmuto, he lacks the depth needed to plug the holes in his lineup should one of his big power hitters go down. He will need to be active on the waiver wire to try and build his depth.

Scott’s Response: I’ve got some studs on my team with Mike Trout and THE BEST SHORTSTOP IN THE GAME in Carlos Correa. Brett’s right that this team is going to hit bombs for days. I disagree that it’s one-dimensional though. I took care to build up options in batting average and stolen bases later in the draft, though my team will still strike out more than I’d like. I’ll sum it up like this: if the biggest concern with my team is the guys on the bench, I’m in pretty good shape.

One thought on “Fantasy Baseball and the Destruction of Friendships”