The first round of the World Baseball Classic concluded last night, as Venezuela eliminated Italy 4-3 in a seesaw affair. The second round has already started in Pool E between the Netherlands, Israel, Cuba, and Japan, with play in Pool F set to begin tonight between the Dominican Republic and Puerto Rico. But before we bid adieu to the first round of the 2017 WBC, it’s time to look back and reminisce on our favorite moments from the first week of the tournament.

Now, I’m not talking about counting down the best baseball plays. That would be dominated by Puerto Rican batflips (seriously, check these out), Dominican home runs, and some slick defensive moves from Team Israel.

I’m talking about the greatest moments that have nothing to do with baseball. Like:

Anyone watching the much-anticipated tilt between the USA and the Dominican Republic would have been forgiven for thinking Marlins Park had turned into Little Dominica. The fans brought drums, horns, and noisemakers, making the contest feel more like a STOMP! concert than a baseball game. Just listen to them:

The record-breaking crowd was in boisterous spirits even when Team DR was down 5-0, and when the Dominicans started their comeback they got even louder. The eruption came with Nelson Cruz’s 3-run missile in the bottom of the 8th inning:

But the best response might have come from San Francisco Giants pitcher Johnny Cueto, who himself almost pitched in the WBC:

The Dominican Republic advanced to second-round play in San Diego, so we’ve been blessed with at least three more games to enjoy the energy and passion of Dominican fans.

Bruce Chen’s been playing baseball for a long time. He spent 17 years in the major leagues. He pitched for Panama in the last World Baseball Classic. With all that experience, he knows that sometimes, comfort is more important than style:

Bruce Chen, I got one question for you… pic.twitter.com/QYlhwDPZuh

Did he have a major business meeting before the game? Did his dog chew through his regular baseball cleats? Is he trying to start a trend of “baseball-casual” attire? We may never know.

The shoes did, in fact, have spikes, and Chen pitched 2 2/3 innings of shutout ball while wearing them. With China’s elimination from the tournament, Chen is officially retired from professional play. He’s clearly already got comfortable shoes to enjoy his life after baseball.

When baseball teams need inspiration, they look to totems, items with magic juju that give them the power to do amazing baseball things. Look at the success of Fernando Rodney’s Rally Plantain last year. He brought it back for the 2017 WBC, but other teams have clearly caught on to the trend.

Team USA went with perhaps the most iconic American symbol of all time:

Hard not to be patriotic with an eagle in the dugout. #TeamUSA 🇺🇸 pic.twitter.com/4HkYUJoRwB

He’s not exactly a mascot, but the Dominican Republic turned to a baseball icon for good luck in their dugout:

But the star of the 2017 WBC thus far has unquestionably been Team Israel’s Mensch on a Bench. 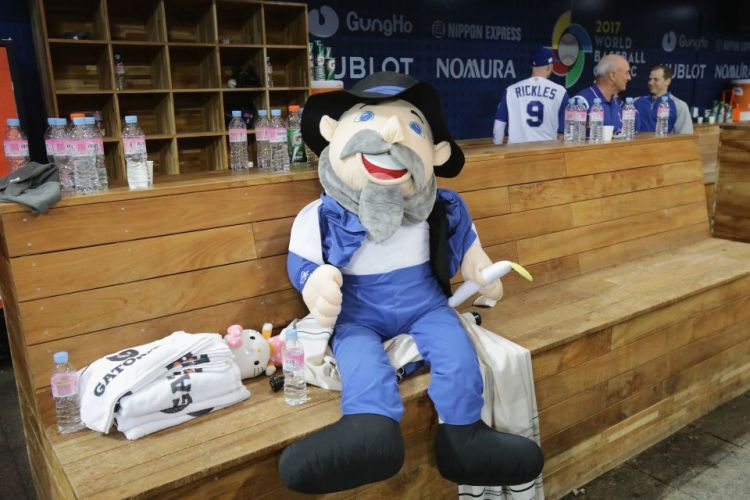 Based on a character in a Jewish children’s book, the Mensch on a Bench has been everywhere. He’s been in the dugout, where he made a new friend:

Team Israel's good luck charm at the World Baseball Classic, the Mensch on the Bench, appears to have befriended a Hello Kitty in Japan. pic.twitter.com/iIFiIYMPH3

He’s been in the press room, helping 1B Cody Decker field the tough questions: 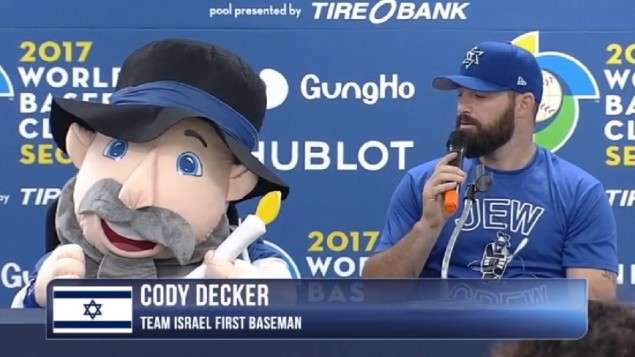 He even got his own seat on the flight to Tokyo, and enjoyed some in-flight refreshments:

The mensch enjoyed his flight to Tokyo. Time to pick up where we left off in Seoul!@WBCBaseball #TeamIsrael pic.twitter.com/JJTZmo2i2U

Will the Mensch on a Bench guide Israel to the semifinals of the tournament? We sure hope so. But if the first round of the WBC is any indication, we’re in for a wild, wacky, and exciting second round to this years’ tournament.